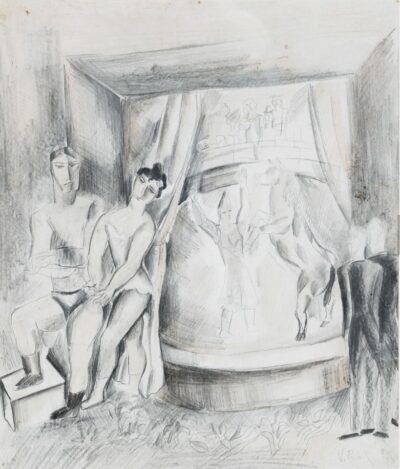 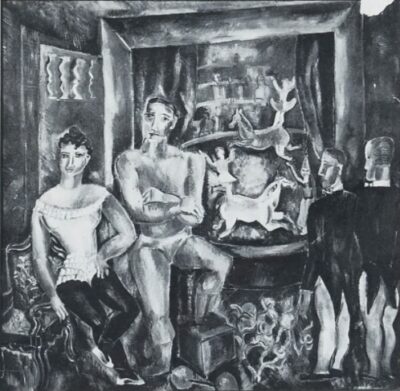 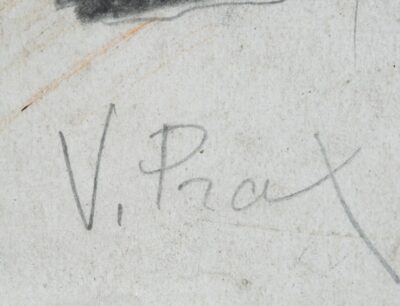 This artist was born in Bône (Algeria) from a Catalan father and an Italian (Sicilian) mother. In 1913 she was admitted to the ‘École des beaux arts’ in Algiers which was the equivalent of the Parisian art school. At the end of World War 1 she decided to go to Paris and rented a room in the Rue Rosselet and thus became the above neighbour of Ossip Zadkine, who had already been living in Paris since 1909. He introduced this shy and young artist in the Bohemian Paris art life around Montparnasse. Her classic art school education couldn’t count on the approval of Zadkine, who inspired her to move in another (read; less classical) direction, with the use of different subjects. The Parisian “École des Beaux Arts” was in the eyes of Zadkine old fashioned and obselete and advised her to take lessons at the ‘ Académie de la Grande Chaumière’. After some time she began to feel at home in the artists circle and became friends with Chaïm Soutine (1893-1943), Amadeo Modigliani (1884-1920), Tsuguharu Foujita (1886-1968) and his wife the painter Fernande Barrey (1893-1960). These last two became their closest friends and also were their wedding witnesses in 1921, when they married in the small village of Bruniquel. Later they bought a house in Caylus and travelled back and forth between Paris and the province (Quercy). Valentine developed into a quite succesfull painter and her work was represented by some prestigious Parisian art dealers as galerie Barabazanges who also represented a.o.; van Gogh, Renoir, Gauguin. She was contracted by this galerie. Her work was bought by the art collector P.A. Regnault who had also bought works by Chagall, Soutine and Modigliani. Works out of this collection have been on show for years at the ‘Stedelijk Museum’ in Amsterdam.

This drawing by Valentine Prax illustrates her love for the circus. She has made many drawings and paintings around this theme. She frequently attended the “Cirque Médrano”, but also ballet and revue performances. The illustrated photograph is the painting made after the drawing. The man on the left looks a lot like Ossip. Her work was shown between 1920-1940 in many expositions in France and abroad. Solo, but also with other artists and sometimes together with Zadkine in Paris, Brussels, London and even the United States. Worth while mentioning: From november 11th. 1922 until april 2nd. 2023 there is an exhibition in the Musée Zadkine in the Rue d’Assas; “Une vie d’Ateliers” in Paris of this artist couple.